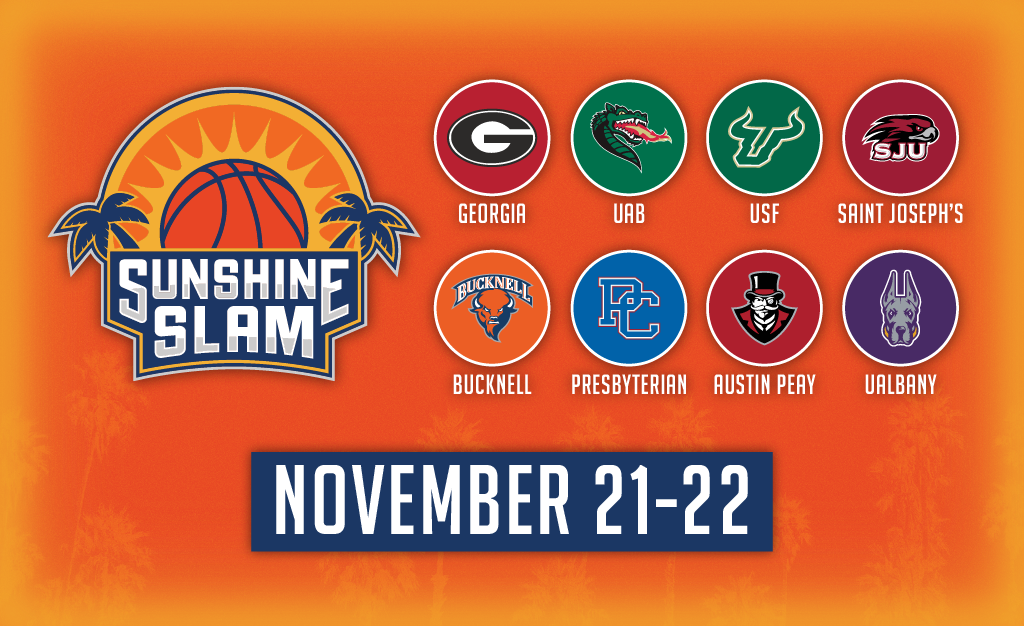 TICKETS ON SALE NOW FOR THE SUNSHINE SLAM

PRINCETON, N.J. - Tickets are now on sale for the Sunshine Slam (@thesunshineslam) men’s college basketball tournament, which will take place November 21-22 at the Ocean Center in Daytona Beach.

Tickets may be purchased in advance at TicketMaster.com or on the day of competition at the Ocean Center box office.

The field for the event consists of Georgia, Saint Joseph’s, South Florida, and UAB playing in the Beach bracket and Austin Peay, Bucknell, Presbyterian, and UAlbany competing in the Ocean bracket.

In the Sunshine Slam this past November, Utah and Air Force won their respective brackets. The Utes beat Boston College and Tulsa to win their championship, while the Falcons took down Holy Cross and Bethune-Cookman to win their trophy.

Georgia - Head Coach: Mike White (Southeastern Conference)
Georgia begins a new era with first-year head coach Mike White, who has averaged more than 22 wins per season in 11 combined campaigns leading Louisiana Tech and Florida…White has developed a reputation for an exciting and winning brand of basketball as his teams have advanced to postseason play during nine of 10 possible seasons, with four NCAA Tournament bids headlined by a trip to the 2017 Elite Eight…his teams have also never experienced a losing season…senior Braelen Bridges led the SEC and ranked seventh nationally in field goal percentage (.634) last season in becoming the first Bulldog to be the SEC’s most efficient shooter since Lavon Mercer in 1980…for the year, he ranked second among Bulldogs in scoring (12.9 ppg) and rebounding (5.6 rpg)…rising junior Jabri Abdur-Rahim transferred to Athens from Virginia and was just one of three players to appear in all 32 games, averaging 6.9 points.

USF - Head Coach: Brian Gregory (American Athletic Conference)
Brian Gregory, who is entering his sixth season with USF in 2022-23, guided the Bulls to the 2019 CBI Championship and the most wins (24) in program history in 2018-19…a year ago, the Bulls added 10 new players to their roster in a reloading year… front court players rising sophomore forward Corey Walker Jr. and rising junior center Russel Tchewa thrived over the second half of the 2021-22 season and will be key contributors to the Bulls’ success this season…Tchewa started 27 games and ended the campaign averaging 8.0 ppg and 5.7 rpg…those numbers improved over the final six games of the season when he posted averages of 12.5 ppg and 7.5 rpg…the same went for Walker, who started 12 times and averaged 5.5 ppg and 4.7 rpg for the season but tallied 8.3 ppg and 7.0 rpg over the final nine games…USF’s top recruit for this season is Ryan Conwell, who was named the Marion Country (Indiana) Player of the Year.

Saint Joseph’s - Head Coach: Billy Lange (Atlantic 10 Conference)
Billy Lange is entering his fourth season atop Hawk Hill after spending six seasons on the Philadelphia 76ers’ bench…the Hawks are expected to return three starters, including Atlantic 10 All-Rookie team honoree Erik Reynolds II, a rising sophomore guard who averaged 12.1 ppg to go with 68 assists and 24 steals…as a freshman, he started 29 games and averaged over 32 minutes a game…graduate student Ejike Obinna is coming off a career season as the Vanderbilt transfer led the Hawks in rebounding (7.9 rpg) and field goal percentage (.574), while averaging a career-high 12.1 points per game...rising senior guard Cameron Brown started 25 games a year ago and posted an 8.3 ppg scoring average along with 55 assists and 28 steals…in league games, he significantly improved his shooting numbers, shooting .456 from the field and .408 from three, as opposed to his season percentages of .410 and .336.

UAB - Head Coach: Andy Kennedy (Conference USA)
In just their second season under head coach Andy Kennedy, the Blazers won a record 27 games, captured the C-USA tournament title, and made their 16th NCAA Tournament appearance in the 44-year history of the program…UAB finished with its highest final NET Ranking (No. 46) in program history and won 17 games over conference opponents for the first time ever…the Blazers led Conference USA in scoring offense for the first time, averaging more than 80 ppg for the first time since 1991…for the first time since 2015-16, UAB had multiple all-conference honorees, including Conference USA Player of the Year Jordan “Jelly” Walker, who also earned C-USA tournament MVP honors, joining UAB legend Oliver Robinson as the two Blazers to earn conference Player of the Year and conference tournament MVP honors in the same season...nationally, UAB finished in the Top 10 in five major statistical categories - steals (4th, 336), scoring margin (6th, 13.6), scoring offense (6th, 80.3), steals per game (7th, 9.6), and turnover margin (10th, 4.3).

Austin Peay - Head Coach: Nate James (ASUN Conference)
The Govs are coached by former Duke assistant and player Nate James, who guided APSU to eight wins in the Ohio Valley Conference last season, a total that ranks as the third-most by a first-year head coach at Austin Peay…the Govs are led by 2022 OVC Freshman of the Year Elijah Hutchins-Everett, a 6-11 center who topped APSU in points (12.3 ppg), rebounds (6.8 rpg) and field goal percentage (.510) in becoming the only freshman in school history to lead the team in each of those statistical categories… rising sophomore swingman Caleb Stone-Carrawell ranked second on among the Govs with an 11.4 ppg average and netted double figures 16 times… rising senior swingman Cameron Copeland placed fourth on the team with 249 points in recording 13 double-digit scoring games… last season, APSU held seven opponents to under 60 points in a game, the most in a single season since 2010-11…Austin Peay will enter its first season as a member of the ASUN Conference after residing in the Ohio Valley Conference since 1962.

UAlbany - Head Coach: Dwayne Killings (America East Conference)
Dwayne Killings will enter his second season as head coach of the Great Danes in 2022-23…his first season saw UAlbany post 13 wins and a 9-9 record in conference play…a year ago, the Great Danes defeated Boston College, 61-57, to mark first time UAlbany had ever beaten an ACC foe…Justin Neely, a six-time AEC Rookie of the Week, was named America East Rookie of the Year for averaging 6.4 ppg, 4.4 rpg, and shooting .444 from the field…Aaron Reddish, the brother of NBA star Cam Reddish, joined Neely on the All-Rookie team…rising senior Trey Hutcheson is the longest-tenured Great Dane, having joined the team at the start of the 2019-20 season and appearing in over 70 games…last season he made 18 starts while averaging 5.4 points, 2.9 rebounds, and 22.4 minutes.

Presbyterian - Head Coach: Quinton Ferrell (Big South Conference)Quinton Ferrell just completed his third season at the helm of the Blue Hose program…a three-year starter at point guard at Presbyterian, he served as team captain for the 2006-07 season…forward Winston Hill will return to the Blue Hose roster for his fifth-year…he began his college career at Francis Marion and has played the last two seasons at Presbyterian…he has scored over 1,400 points in his college career and finished fourth in the Big South with a 6.5 rpg average to go with 12.2 ppg…Presbyterian finished last season ranked 24th in the nation with a 12.38 offensive rpg average… rising sophomore guard Marquis Barnett was selected to the Big South All-Freshman team after averaging 5.8 ppg to go with 23 steals and assists…rising senior Trevon Reddish-Rhone has been Presbyterian's starting point guard for the last two years…rising senior forward Owen McCormack was named the Big South Men’s Basketball Scholar-Athlete of the Year and a CoSIDA Academic All-District honoree.

About the Gazelle Group
The Sunshine Slam is produced by the Gazelle Group of Princeton, N.J. The Gazelle Group is a sports marketing firm, specializing in event production and management, client representation, and sponsorship consulting. In addition to the Sunshine Slam, Gazelle produces numerous nationally-recognized college basketball events, such as the Empire Classic benefiting Wounded Warrior Project, the Legends Classic, the Gotham Classic, and the College Basketball Invitational, and the Kwik Trip Holiday Face-Off hockey tournament. For more information on the Gazelle Group, please visit www.gazellegroup.com.

About the Northeast Conference
The Northeast Conference (NEC) is the sponsoring conference of the Empire Classic benefiting Wounded Warrior Project. Now in its 41st season, the NEC is a NCAA Division I collegiate athletic association consisting of 10 institutions of higher learning located throughout seven states. For more information on the NEC, visit the official website at www.northeastconference.org or follow on Twitter @NECsports.