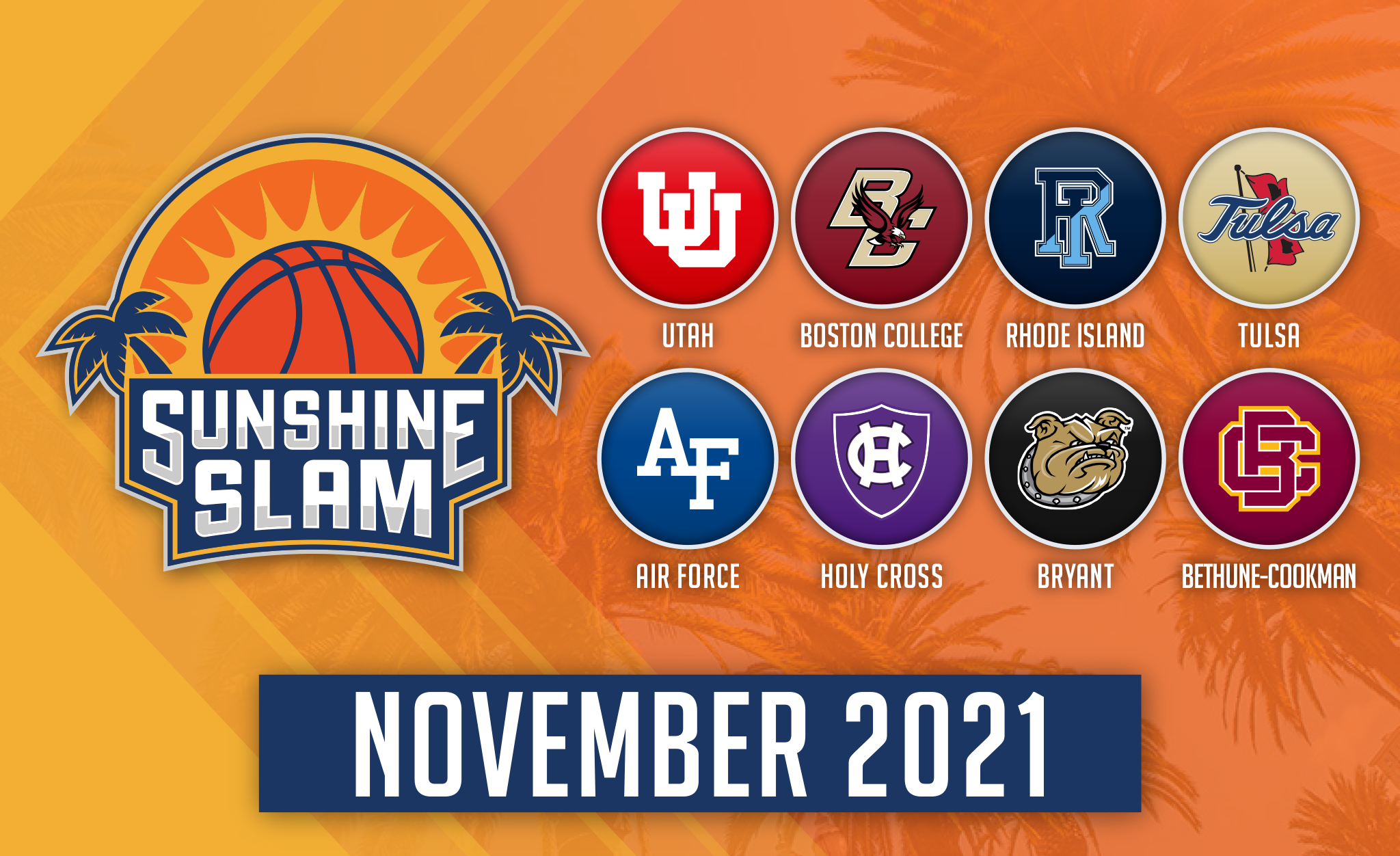 The schedule is set for the Sunshine Slam in Daytona Beach, Florida featuring Utah, Boston College, Rhode Island, Tulsa, Air Force, Holy Cross, Bryant, and Bethune-Cookman. The Championship Rounds will be played on November 20 and 21 with two brackets of play. Each team will play one game prior to the games in Daytona Beach.

The complete schedule is as follows (all tip times, game order, and television details to be announced):

In the 2019 Sunshine Slam in Kissimmee, Florida, Delaware, Oakland, Southern Illinois, and UTSA played a round-robin format with each team playing the others over the course of three days. Delaware came out on top winning all three of its games.

Utah (Head Coach: Craig Smith, Pac-12 Conference)
Head Coach Craig Smith begins his first season at the helm of the Utah Utes’ program after leading his teams to three consecutive NCAA tournament invitations at Utah State. A proven winner, Smith and his staff have assembled a roster that positions the Utes to continue that trend with a talented array of new players joining several key returnees with experience in the Utah program. Junior center Branden Carlson (9.4 ppg, 4.6 rpg) ranked second in the Pac-12 in blocked shots per game (1.68; 42 total) in 2020-21, while senior forward Riley Battin (6.6 ppg, 3.4 rpg) also returns, and senior Both Gach—a former Utah starter—returns after spending the 2020-21 season at Minnesota. Talented incoming transfers also include Marco Anthony and Rollie Worster from Utah State, David Jenkins, Jr., from UNLV, Dusan Mahorcic from Illinois State and Gabe Madsen from Cincinnati.

Boston College (Head Coach: Earl Grant, Atlantic Coast Conference)
Boston College embarks on the 2021-22, beginning the Earl Grant era. The highly successful Grant was introduced as the program's 13th head coach this past March. after serving in the same capacity at the College of Charleston for the past seven seasons. The Eagles return two starters and five scholarship players from a season ago, while welcoming seven newcomers (four freshmen, three transfers) to the court. Makai Ashton-Langford (9.6 ppg) is the team's top returning scorer. The redshirt junior point guard also averaged 3.3 rebounds per game while leading BC in assists (3.2) last year. His younger brother DeMarr Langford (6.7 ppg/4.2 rpg/1.4 apg) also returns, along with Fred Scott (7.6 ppg/3.9 rpg) and James Karnik (6.8 ppg/5.4 rpg). TJ Bickerstaff, who averaged 10.2 points and 5.2 boards per outing a season ago for Drexel, as well as Brevin Galloway (15.0 ppg and 3.0 rpg) from CofC, highlight the transfers who should make an immediate impact on the lineup. Boston native Gianni Thompson - a consensus four-star recruit - leads the way among the first-year newcomers.

Tulsa (Head Coach: Frank Haith, American Athletic Conference)
Tulsa was the seventh seed in the American Athletic Conference tournament, finishing the 2020-21 season with an 11-12 record and 7-10 conference record ... under head coach Frank Haith the Hurricane has won 74 conference games, ranking 3rd since joining The American in 2014-15 ... TU returns two starters as well as reigning AAC 6th Man of the Year Darien Jackson ... Jackson finished the season first in the conference for field goal percentage with a .640 clip, shooting over 50-percent in 19 of Tulsa’s 23 games ... in addition to the returning stars, the Hurricane welcome seven newcomers with three freshmen, two JUCO transfers and two four-year transfers ... Jeriah Horne returns to Tulsa, following a season at the University of Colorado ... Horne played for the Hurricane from 2017-2020, playing in 63 contests while averaging 10.6 points and 5.0 rebounds.

Air Force (Head Coach: Joe Scott, Mountain West Conference)
Air Force begins its second year under head coach Joe Scott in 2021-22. The Falcons return two starters and 11 letter winners from last season. The Falcons are led by senior AJ Walker (15.3 ppg), a 2021 All-Mountain West point guard and junior forward Nikc Jackson (8.2 ppg). Air Force, located in Colorado Springs, Colo., competes in the Mountain West Conference. Scott is in his second stint at Air Force (having previously been the head coach at the Academy from 2000-04). Scott, who also had head coaching stints at the University of Denver and his alma mater of Princeton, led Air Force to its lone conference title in 2003-04.

Holy Cross (Head Coach: Brett Nelson, Patriot League)
Now entering its third season under head coach Brett Nelson, the Holy Cross men’s basketball team is looking to continue its rise in the Patriot League in 2021-22. After showing significant improvement during last year’s shortened season, the Crusaders will bring back three starters and six of the nine players who saw action in the regular rotation. Leading the way will be senior forward Gerrale Gates, who earned third team All-Patriot League honors last year after averaging a team-best 16.4 points, 7.6 rebounds and 0.7 blocked shots per game. With the addition of a talented freshman class, Holy Cross will have the ability to compete with anyone in the Patriot League.

Bryant (Head Coach: Jared Grosso, Northeast Conference)
The Bryant men’s basketball team is coming off one of its best seasons in Division I program history in 2020-21. Bryant finished 15-7 on the year and was ranked in the Mid-Major Top 25 for the first time since the 2012-13 season. The Black and Gold finished second in the Northeast Conference, advancing to the NEC Championship for the first time in program history. Bryant also earned a bid to the postseason for the second time in program history, playing in the College Basketball Invitational. The Bulldogs will welcome back five starters in 21-22, led by Peter Kiss, a USBWA All-District selection and the team’s leading scorer. Kiss averaged 16.6 ppg and will be joined by Charles Pride (13.7 ppg), Chris Childs (14.0), Hall Elisias (10.3, 7.6 rpg, 2.5 bpg) and Luis Hurtado Jr. (5.2 ppg, 2.7 apg).

Bethune-Cookman (Southwestern Athletic Conference)
Bethune-Cookman retakes the floor after opting out of the 2020-21 season determined to regain its high level of play. The Wildcats have registered a winning record in two of their past three seasons. The Wildcats will also come out enthused and determined as they prepare for their first season as members of the Southwestern Athletic Conference. B-CU will feature Joe French, who averaged 8.5 points a game as a freshman in 2019-20. He was Mid-Eastern Conference Rookie of the Week three times and earned a berth on the All-Rookie team. The hometown Wildcats have played many notable games in the Ocean Center, including a match-up with Vince Carter and North Carolina when the local superstar made his homecoming game in 1997.

About the Gazelle Group
The Sunshine Slam is produced by the Gazelle Group of Princeton, N.J. The Gazelle Group is a sports marketing firm, specializing in event production and management, client representation, and sponsorship consulting. Gazelle produces numerous nationally-recognized events, such as the Empire Classic benefiting Wounded Warrior Project, the Legends Classic presented by Old Trapper, the Gotham Classic, the Holiday Face-Off, and the College Basketball Invitational. For more information on the Gazelle Group, please visit gazellegroup.com.

About the Northeast Conference
The Northeast Conference (NEC) is the sponsoring conference of the Sunshine Slam. Now in its 41st season, the NEC is a NCAA Division I collegiate athletic association consisting of 10 institutions of higher learning located throughout seven states. For more information on the NEC, visit the official website at www.northeastconference.org or follow on Twitter @NECsports.